A letter written by William Wallace around 700 hundred years ago was today returned to Edinburgh having been discovered at the Tower of London. Back in Auld Reekie it will go on show at the Scottish Parliament this summer. The life and battles of the Wallace ‘Guardian of Scotland’ was brought to public attention in the works of Sir Walter Scott as well as on the big screen in the Award-winning film Braveheart. A statue of Wallace stands outside Edinburgh Castle and at Smithfield in London there is a plaque near to the site on which Wallace was hung drawn and quartered in 1305 having been found guilty of treason against King Edward I of England. 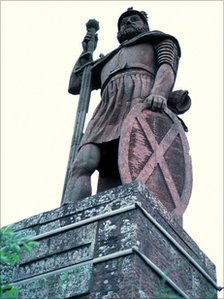 Wallace was one of the main leaders of the Wars of Scottish Independence and it is interesting to consider what he would have thought about the current Holyrood and Westminster ranglings! If you are looking to pay homage to Wallace there are a number of Wallace tartans available including Wallace Modern, Wallace Hunting Ancient and the standard Wallace tartan. Please get in touch if you would like to order a made to measure men's kilt in one of the Wallace tartans - Place your order by the end of January and receive 15% off as part of our 15% off everything in store promotion.