Two Panda’s will be arriving at Edinburgh zoo this weekend – there is much excitement as they will be the first time these iconic animals have lived in the UK for seventeen years. The Pandas are being flow in on a Boeing 777 Freighter which has been chartered for the occasion. Pandas are by nature solitary, so the two will be living in separate £250,000 enclosures which feature caves, climbing structures made of tree trunks, and a water feature. Hugh Roberts the Head of Edinburgh Zoo commented that ‘The arrival of Tian Tian and Yang Guang is a historic occasion for the zoo, for Scotland, and for the UK as a whole … our newest additions will offer visitors a once in a lifetime to view these extraordinary animals’ looking to the future he added ‘we are hopeful that the female, Tian Tian, will give birth to cubs – the first to be born in Scotland.’ As well as a great attraction for visitors to the zoo, as Liu Xiaoming, the Chinese Ambassador to the UK explained the Panda’s arrival in the UK is ‘part of a joint 10-year research programme to find out hoe human-bred pandas can survive in the wild.’ Young people will also be given the opportunity to learn more about the Panda’s during their ten year stay as an exciting learning programme has been developed. The generous loan of the pandas from China is also an opportunity to strengthen the business and cultural links between Scotland and China. Chinese Scottish tartan forges also helps to develop the social and political ties between China and Scotland. 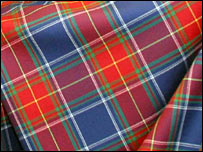 The colours chosen for the Chinese Scottish tartan represent the bond between the two countries, the design includes the blue and white of the Saltire combined with the red and yellow of the Chinese flag, green was also included in the design as it is a traditional colour in tartans and references the links between the botanical communities of both China and Edinburgh - indeed the botanic gardens in Edinburgh holds the largest number of Chinese plants outside of China. China’s association with Scotland goes back 1000’s of years when explorers in China found a burial place of Caucasian travellers wearing perfectly preserved tartans. The Chinese Scottish tartan was unveiled on the 6th of April which is National Tartan Day and it was designed jointly by the Scottish Tartan’s Authority and the Strathmore Woollen Company. The new tartan has proved very popular with the local Chinese community, Chinese students studying in Edinburgh and tourists from China – bought for wedding, graduations and as a gift to take back home. Chinese women in particular are attracted to tartan as a high fashion garment. The creation of a Chinese tartan and the arrival of the Pandas are both symbols of co-operation and harmony between China and Scotland.
Share on Facebook Tweet on Twitter Pin on Pinterest