Last Thursday, September 16th, was a historic day for Scotland when the Pope visited Edinburgh and Glasgow - the first papal visit to Scotland in 28 years. 82 year old Pope Benedict XVI was warmly welcomed by over 200,000 Scots. 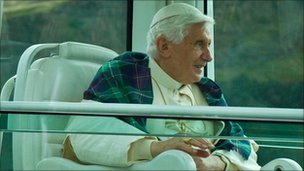 While travelling to Holyrood Palace in the popemobile and during his meeting with Nick Clegg, Deputy Prime Minister, Alex Salmond, First Minister and Rowan Williams the Archbishop of Canterbury, the pope wore a tartan scarf - in the official St Ninian's Day papal tartan - gifted to him by the Head of the Catholic Church in Scotland. Also at the meeting was Ian Gray, the Scottish Labour leader, who wore a blue and green tartan tie which had been designed to celebrate the Pontiff's visit.

The visit was a great opportunity to show case the best Scottish traditions - with the Pontiff enjoying traditional fare of haggis, neeps and tatties at the Cardinal's house, receiving a Guard of Honour from kilted solders of the Royal Scottish Borderers, the Black Watch and 52 Lowland Regiment, and hearing music from the Strathclyde Police Pipe Band.