This year celebrations around the UK and the world will be held to mark the Queen’s Diamond Jubilee. Events will take place over the first weekend in June. An extra Bank Holiday is being created in addition the May Day bank holiday is being moved to 4th of June so we will all be able to enjoy a four day weekend! Taking place a few weeks before the spectacle of the Olympics you can expect to see a fantastic range of events on offer to mark this landmark anniversary. And it’s good news for Scots too with The Scottish First Minister Alec Salmond confirming that the extra days’ holiday would apply to Scotland. The Jubilee marks the Queens sixty years on the throne (the only previous British monarch to have reigned so many years was Queen Victoria who reigned for 63 years). Queen Elisabeth II ascended to the throne when her father King George VI passed away. In addition to the events planned commemorative medals will be issues to those who have made an outstanding contribution to the UK, another idea under consideration is a horse race in honour of the queen given her love of horses. The UK government has expressed an interest in exploring other ideas that honour the Monarch and given the close relationship between tartan and the Royal family we would expect to see a commemorative tartan being produced. Of course this would take on greater significance if Scotland became an independent country – in which case it could be a fitting parting gift! Hadrian's Wall Heritage are lighting 60 beacons along the length of Hadrian's Wall - each beacon representing a year in the life of the Queen's reign and a series of events are being planned across Scotland to mark the milestone celebration. Alec Salmond said ‘The people of Scotland have a special affection for The Queen, and I am sure that they will welcome the opportunity to join in the celebrations being planned to mark Her Majesty's Diamond Jubilee’ he added ‘The Scottish Government is working with Buckingham Palace and the UK Government on plans for a series of events to be arranged to enable communities across the country to mark the Diamond Jubilee.’ There are many tartans closely connected with the Royal Family such as the Royal Stewart, which although the personal tartan of Queen Elisabeth II is worn widely, as well as those that are exclusive to members of the Royal family such as the Balmoral tartan. It is worn by HM Queen herself and, with the queen’s permission, can be worn by other members of the Royal Family. The only other person approved to wear the Balmoral Tartan is the Queen's personal piper. The Balmoral was designed by HRH Prince Albert, Royal Consort to Queen Victoria in 1857. 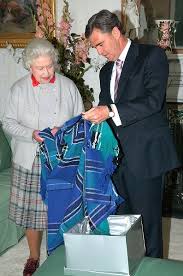