Make history come alive with a visit to a Scottish castle and soak up the heraldic atmosphere of Scotland’s turbulent history. Scotland’s historic castles are the seats of ancient clans and symbolise the importance of Scottish clans to this day. Whether you are paying a visit to a world famous castle such as Edinburgh or Stirling castle or planning a trip to one of the smaller castles each will capture the imagination and give you a fantastic insight into Scotland’s history. Here are a few of our favourites. Located on Loch Duich, Eilean Donan castle is an archetypal Scottish castle its beauty, and spectacular setting, has made it the most photographed castle in Great Britain. Athough it was destroyed during one of the Jacobite risings in the 18th century, it was then restored to its former glory some two centuries later and is the headquarters of the Clan McRae. Eilean Donan has long been associated with the Macraes and was a stronghold of the chiefs of Clan Mackenzie.

There are over twelve tartans associated with Clan MacRae including the MacRae, Hunting MacRae, MacRae of Conchra or Sheriffmuir, and the Dress MacRae. Blair Castle is the ancient seat of the Dukes and Earls of Atholl and home to the Atholl Highlanders, the last remaining private army in Europe. The Atholl tartans are the Murray of Atholl and the Murray of Tullibardin ancient.

Dunvegan is the oldest continuously inhabited castle in Scotland and has been the ancestral home of the Chiefs of Clan MacLeod for over 800 years.

Dunvegan Castle continues to hold a Clan MacLeod Parliament every four years to which MacLeod’s from all over the world return to their ancestral home for this special family gathering. Members of the clan Macleod wear the MacLeod of Lewis or the MacLeod of Harris tartan. Inveraray Castle dates from the 18th century and is home to the Duke of Argyll, Chief of the Clan Campbell, whose family have lived in Inveraray for over five centuries. 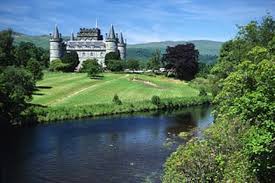 Clan members can wear the Maclean of Duart tartan As well as such strongholds owned by the largest clans such as the Stewart, Douglas, Keith, MacDonald, MacLean, MacLeod, Campbell, Gordon, Forbes and Sinclairs there are many Scottish castles, tower houses and fortified houses that belonged to smaller lairds and landowners such as the homes of the Blackadder, Carruthers, Garden, Heron, Livingstone, MacAulay, MacFarlane, Oliphant, Porterfield, Riddell and Weir clans. Visiting the ancestral home your clan or family name bring to life the traditions, origins and stories associated with your clan. To find out more about the tartan associated with you clan contact us and we will be happy to advise you. We also offer an extensive range of clan crested items.